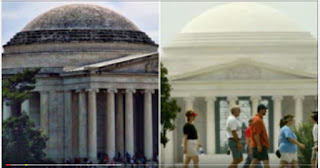 It would not surprise me if this is an act of an angry God trying to get our attention. I know that comes across as a crazy idea, but consider the reasons I think this might be a possible explanation...
With this image of a cross on the National Mall it is near impossible to imagine this is all a product of men's design. The original design did not include a cross-like image. I believe the cross is a creation of our wondrous God who tells us nothing is impossible with him. It is a creation of a supernatural creator. But why has it gone for so long unnoticed?

I suspect God is revealing this cross to use in these last days by design. Christianity is coming under constant persecution and the Bible is ignored as God's Word by the majority of people on earth. Could God be providing this sign as a new symbol of Christianity for the lost in the world to once again consider Jesus?

What does this have to do with the Mystery Microbes growing on the Jefferson Memorial? How can a strange growth exist these days that men cannot figure out how to stop? If it is a mystery organism it certainly could be a God created growth that is slowly overtaking the memorial built to honor the doubting Thomas Jefferson. Is this what happens to doubters?

I believe this is a sign from God that might serve multiple purposes; it can remind Christians to realize God is still here with us today; a sign to the world's agnostics and doubters that might cause them to reconsider Jesus call for people to come to him; or a sign men will ignore today but might one day remind them that God was calling out to them, and they refused to listen.

There are lots of impossible sounding miracles in the Bible where God did strange things to get people's attention. I believe the grown on the Jefferson Memorial is very possibly a modern day miracle of God designed to get our attention.

With God, nothing is impossible?

See my past blog article that tells more about the Cross on the Washington D.C. National Mall.
http://amazingword.blogspot.com/2012/07/1776-july-4th-cross-of-calvaly-on-usa.html

Posted by Norm Patriquin/AmazingWord at 12:36 AM

Get this Recent Comments Widget